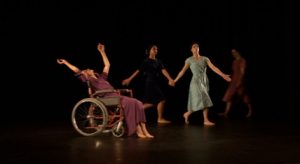 A selection of scenes from this modern dance choreographed by Janet Randell to music by Chopin was performed and filmed recently at the Theatre Severn, Shrewsbury.

Randell writes in the prologue to Passing Moments, one of her most recent digital dance films: “This is not entirely the story of Anne Frank and of those touched by the Holocaust, but my interpretation of the tale of anyone who has ever felt trapped and lost in their life, and who is fighting for physical, mental or spiritual survival.”

“Passing Moments also portrays many aspects of Anne and the characters, stories, reflections and incidents recorded in her writings, including early reminisces, gentle humourous episodes, burgeoning spiritual awareness of the presence of God, and the ever-growing horrors of the fate of the Jews, minorities and the disabled. The striking quality of some of Chopin’s piano music, with its near perfection in form and harmony, together with its elusive and enigmatic subtleties of rhythm and smouldering undertones of poignancy and tension, inspired me to choreograph a vignette type of dance for stage and film. Contrasting scenic images are portrayed through the different ‘Anne archetypes’, the characters created in her imagination and stories, as well as the family and those who shared her life in the Annex“.

“Throughout my career, many of the dances which I have choreographed, have expressed something of the wonder of God’s creation and the profound depth of God’s love for humanity, even at the heart of human misery. Some dances have raised serious social and human issues such as loneliness, abandonment of the elderly, abortion, pain and hurt in relationships, divorce, grief over the murder of loved ones, and the loss of a child. Passing Moments touches in particular on the resilience of the human spirit and the gifts of wonder, joy, perseverance and optimism in the midst of suffering.”

Arts Guardian: “Miss Randell is the one who really and truly has got something. She is exploring where, only Martha Graham has, to any great extent, explored before. A genuine distinctive choreographic imagination.”